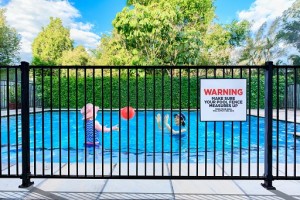 Hundreds of pool owners have escaped fines despite not complying with new safety rules, sparking calls for tougher penalties. The legislation, which came into effect in a year ago, resulted in a single statewide pool safety standard to be enforced by local councils. The rules included fully fenced pool enclosures, child-proof latches and restrictions of climbable objects near pool fences.

But The Sunday Mail can reveal that since the new laws came into effect in December 2015, there have been only 27 fines handed out by the Brisbane, Gold Coast, Logan, Townsville and Ipswich councils, despite at least 324 non-compliant pool owners being given enforcement notices.

Most fines were because of non-compliant fences. Moreton Bay, Rockhampton, Toowoomba and Sunshine Coast councils did not issue any fines, but handed out hundreds of enforcement notices.

Royal Life Saving Queensland director Michael Darben said giving people the opportunity to become compliant was “more important than slapping fines on them in the first place. If they ignore the warning, then a fine is warranted.”

Mr Darben, and several Queensland councils, said pool owners leaving gates propped open and climbable furniture nearby were the biggest cause of non-compliance.

The Queensland Building and Construction Commission, which keeps a database of registered backyard pools and monitors compliance, said drowning was a leading cause of death in Queensland for children under the age of five.

The recent Royal Life Saving National Drowning Report 2016 found that 11 children up to four years of age had drowned in Australian swimming pools in 2015-16.

Be Safe Pool Fence Inspections has been in operation from the introduction of the Queensland Pool Safety Legislation in 2010. Providing high quality pool fence inspections and advice for compliance reports, Be Safe are Brisbane’s leading pool fencing inspection company with over 4000 inspections conducted in the local area. Our highly knowledgeable inspectors know the pool legislation like the back of our hand and guarantee we will find a solution to get your pool fence to compliance each and every time. Having been inspecting pools for well over 5 years, there is no situation we have not come across. Don’t risk an inexperienced pool fence inspector, have it done right the first time by booking your inspection with Be Safe Pool Fence Inspections.

The Importance of Swimming Pool Supervision and Compliant Pool Fences

Supervision is the Key to Pool Safety and Children